The term “Asian American” was adopted by Asian American activists during the 1960s and the 1970s to be in solidarity with those who identified as from the Asian continent while also establishing themselves as Americans with Asian descent (Ishizuka pg. 3). The goal of embracing a so-called “Third World Identity” was to dismantle racism, imperialism and other forms of oppression under a pan-Asian umbrella. This term was highly political, as it was also used to establish solidarity with people of Asian descent around the world who were suffering from the effects of Cold War proxy wars fought on the Asian continent, particularly through the Vietnam War. This term produced what we now know as “the Asian American” identity. This development shows that the roots of this community’s Pan-Asian existence is in part due to global conflict and resulting activist work. Hence, it is essential to begin the discussion of activism with the creation of Asian American identity, as it shows this group’s extended involvement in rejecting the status quo.

In 1969, “Asian America” was about young people, mostly second, third, or even fourth generations in the United States, waking to their in-betweenness - between Black and white, migrant, and citizen, silence and screaming- and finding collective release in a mass upwelling of feeling.

Jeff Chang. Forward for Serve the People by Karen Ishizuka

Currently when you say Asian American, all it means is that you are of Asian descent. But originally, it was a loaded word, an explosive phrase that defined a position, a very important position: I am not a marginalized person. I don’t apologize for being Asian. I start with the premise that we have a long and involved history here of participation and contribution and I have a right to be here. 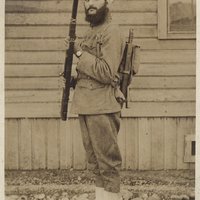 Photograph of Bhagat Singh Thind in his U.S. Army Uniform, from 1918. Thind enlisted in the U.S. Army, and trained at Camp Lewis, Washington.

The characterization of Asians and Asian Americans as “complacent” erases a continued history of Asian American Activism and civil disobedience from the late nineteenth century to the present. Chinese immigrants and populations in the West Coast resisted segregation and discrimination ordinance policies after the Gold Rush. This was notable through the Supreme Court case Yick Wo v. Hopkins in 1886, which targeted discriminatory licensing practices to Chinese laundromats. Additionally, the Chinese and other Asian communities resisted the effects of the Chinese Exclusion Act in 1882 by pursuing multiple Supreme Court cases, and making use of illegal smuggling networks into the the U.S. Throughout the early 1900s, there were multiple cases involving Asian Americans that sued the American government for their citizenship rights based, a prominent case being United States vs. Bhagat Singh Thind. This case placed South Asian in the “non-white” category, making them ineligible for citizenship according to the Naturalization Act of 1790.  As well as pursuing legal routes in order to challenge systematic discrimination, Asian Americans on the West and East Coast built vibrant communities, such as Chinatown, within major cities throughout the country such as New York. Residing and thriving within a nation that openly resented them and upheld segregationist laws proved that Asian Americans resisted the status quo with their mere existence in the United States.

Incarceration of the Japanese Americans during the World War II by the Executive Order 9066 is well known. The internment of more than 110,000 residents was assisted by the United States Census Bureau. Fred Korematsu argued that the Executive Order violated the Fifth Amendment and was arrested and convicted. Minoru Yasui and Gordon Hirabayashi also held the application of curfews went against the constitution. The Supreme Court upheld the government’s actions as legal. After decades of work by the Japanese American Citizens League, “Redress Movement” and other civil rights allies that focused on the loss of individual freedoms guaranteed by the Constitution and enumerated by the Bill of Rights, the Congress and President Ford proclaimed the internment as injustice in 1976. Following President Jimmy Carter’s investigation into the legality of the act, in 1988, President Reagan signed the Civil Liberties Act and issued an apology and ordered redress payments. The cases of Korematsu, Yasui and Hirabayashi also were vacated. But activist groups supported another case that sought redress for Japanese Latin Americans who were deported to be incarcerated in the USA. Resolution for this case was not reached until 1999. This development owed itself to both individual and organized activism of Japanese Americans and their many allies. This case stands as a reminder of the failure of this nation to protect its citizens against prejudice and the power of activism that can redress past mistakes.

The war in Korea and Vietnam was a political awakening for most Asian Americans, empowering them to begin to take a stand against the imperialist motives of the United States and against laws that minimized their freedoms as people of color in the U.S. in order to to fully embrace their rights as citizens (Lee). This included their right to protest under the First Amendment, which they embraced by taking to the streets. Growing Vietnamese and Korean refugee populations inspired Asian Americans to stand together, creating an Asian American identity to take part in anti-war protests. During this time, they also stood in solidarity with other racial minority groups in their fight against their oppression, notably during the Civil Rights and Gay Rights movements within the 1960s, 70s and 80s. The murder of Vincent Chin in 1982 also led to a critical turning point in civil rights engagement for Asian Americans, especially those living in Michigan. Chin’s murder proved that Asian Americans were not safe from racial violence and failings of the justice system that were designed to benefit their white counterparts.

Asian Americans were also involved in labor activism along the west coast during the later half of the 20th century, notably during the 1980s. For example, Chinese and Korean female garment workers, also known as “sweatshop” workers, organized labor unions specifically around their Asian and immigrant identities in order to improve their work conditions in primarily the West Coast (Louie). Most of these organizers and union members were low-income immigrant women of Chinese, Korean and Filipino descent facing sexual harassment, age discrimination, health hazards, long hours and little pay (Louie pg 143)(Ishizuka pg 70). These women, through groups such as the Korean Immigrant Women’s Association (KIWA) helped organize negotiations and strikes in order for immigrant women in sweatshops, factories and restaurants to have respectable working conditions. These organizations also supported each other in finding new jobs if they were fired, finding homes, and giving them shelter in the case one of these workers was assaulted by a male superior or faced domestic violence. This showed that labor organizing among these women were also heavily based in a community of support, where these women would work together and support each other in order to survive. These support networks play into a broader system of Asian Americans working to stand with each other as the Asian American identity began to take hold.