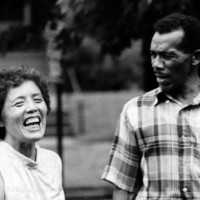 Grace Lee Boggs, a Chinese-American, is noteworthy for her activism for causes that are of fundamental human concerns that cut across racial or ethnic particularities. She is best known for her work in Black Power advocacy, which was done in partnership with her husband, James Boggs. James was an auto worker at Chrysler and a prominent Black Power activist. The Boggs married in 1953 in Chicago and later moved to Detroit in order to develop the Black Power movement in the city. James gave speeches against racism, segregation and wealth inequality based on his experiences as a laborer while Grace combined her philosophical background with her activism skills in order to organize the black community. Grace became a coordinator for the all-black Michigan Freedom Now party in 1965, which worked to get more black candidates into political office. There she worked with black organizers and political candidates to ensure their place on the ballot and put together issues of the newspaper Black America. Grace’s work lead her to organize multiple events with Malcolm X and eventually found the Organization for Black Power in Detroit.

While she was not known for her involvement in the Asian American community, Boggs helped found the Detroit Asian Political Alliance (APA) in 1970 (Fu). This group was comprised of six Asian American core members living in Detroit who engaged in political theoretical study, discussion, and reflection in order to develop meaningful political theory within the Detroit Asian American community. The APA attempted to create a theory of social change amidst the context of deindustrialization, racial and class segregation, and explosive urban tensions that had been accumulating in Detroit for more than three decades. For Boggs and other residents, the crises Detroit faced during the 1950s and 1960s highlighted racial discrimination, corporate responsibility, economic inequality, workers rights, and community. It was a time of urban deindustrialization with the rise of Black Power. In response, African Americans mobilized themselves into various revolutionary organizations to counter and transform the plummeting economy, racist repression, and urban segregation in Detroit. From her activism in the Black community, Boggs concluded that aggrieved racialized groups possessed a particular perspective on power, struggle, and freedom that was of importance to everyone; experiences of slavery, racism, and labor exploitation enabled Blacks to produce a situated knowledge that offered incisive critiques and visionary social alternatives of benefit to all people (Living For Change). Encouraged by the example of Black organizers, she began to explore the prospect that Asian Americans might be of assistance to collective revolutionary struggle. 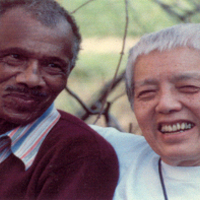 Located in a predominantly African American Detroit, APA’s intellectual development shows an important part of Asian American radical activism. APA members saw themselves as people dedicated to developing revolutionary theory for the masses rather than as community organizers who addressed practical local needs. The APA looked to revolutions happening in Asia during the 1970s, drew upon Asian radical thought, and attempted to develop a philosophy that could fix the social conditions they interpreted as a symptom of a larger crisis in Western ideology. Although their work eventually dissolved due to a lack of direct community engagement, the APA documents the emergence of Asian and Asian American revolutionary philosophy nurtured across multiple generations, ethnicities, and countries (Fu). This is important in showcasing evidence of revolutionary thought within Asian American communities in Michigan.

Several decades later, the revolutionary fervor that had swept across Asia and the United States had subsided, and Boggs also began shaping movement work in ways that suited the new context and climate. In 1992, the Boggs couple founded Detroit Summer, a community movement bringing together people of all races, cultures, and ages to rebuild Detroit in the aftermath of the riots. They aimed for this to be a project that could “rebuild, redefine and respirit” the city from the ground up. Boggs has described the city as:

"a symbol of the end of industrial society…buildings that were once architectural marvels, like the Book Cadillac hotel and Union Station, lie in ruins…and in most neighborhoods people live behind triple-locked doors and barred windows."

This collective aimed to further uplift the black community in Detroit in a different manner to the political organizing Boggs was engaged with throughout the 60s and 70s. Detroit Summer's activities include planting community gardens in vacant lots, creating huge murals on buildings, and renovating houses. Bogg’s work regarding building cities from the bottom up were heavily influenced by her philosophical background about the definitions and necessities of revolutions for the positive evolution of society. Boggs believed that in order to attain freedom for all people and change the system, it was essential that work be done at the community level to strengthen its ties with the people in the area, ultimately leading to systemic change. Though different in style from her earlier work, Detroit Summer nevertheless continues to epitomize the revolutionary philosophies and spirit that Boggs had cultivated and embraced over the years of study and practice.