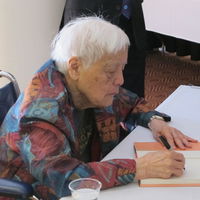 Grace Lee Boggs autographing her latest book, The Next American Revolution: Sustainable Activism for the Twenty-First Century, at the Chinese Cultural Center.

What makes Grace Lee Boggs such as inspiring figure in the Asian American community despite her limited interactions with the community? She is known for discussing the necessity and dangers of revolution in the context of a evolving society. Boggs is significant because she was heavily involved in Black Power activism at a time not many non-Black women were supportive of the movement. Her work in the Black community, especially in Detroit, is one of the strongest examples of solidarity shared by many minority groups. Most importantly, Boggs did not place her identity as a Chinese American woman at the center of her reasons for organizing with and for the Black community. Her Chineseness was essential in forming the person she would become but it did not completely define who she was as a person or as an activist.

Grace Lee Boggs lifetime accomplishments are enormous. They include her engagement with Civil Rights and Black Power Movement activism in Detroit in the 1960s and 70s in partnership with her husband James Boggs (1919-1993). In Michigan, she is famous for starting the James and Grace Lee Boggs School in 2013. The School’s website describes itself as a “community-based school on Detroit's East Side” and emphasizes learning through participation in local service projects for the community and seeks to immerse students in local heritage. Grace Lee Boggs also was a major player in many political organizations, including the creation of the Freedom Now Party in Detroit, which aimed to assist the black community to claim political power but was short lived (1963-65).

Grace Lee Boggs has also authored and published multiple books and articles about revolutions and political theories. The list includes Living for Change: An Autobiography, The Next American Revolution: Sustainable Activism for the Twenty-First Century and weekly columns in the Michigan Citizen. She has co-authored multiple papers and books with her husband, such as Revolution and Evolution in the 20th Century and Conversations in Maine: Exploring Our Nation’s Future.

These organizations and titles, mentioned here, represent a tip of a huge iceberg of accomplishments. Grace Lee Boggs, an Asian American woman, has been one of the most remarkable revolutionary minds of the century. Her activism, based on the foundational spirit of people’s power and humanitarian concerns, has left an incontrovertible legacy for all of us to embrace.