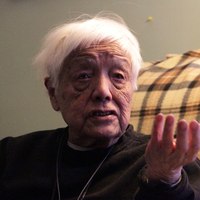 Grace Lee Boggs (1915-2015) was an activist, writer and speaker who was politically involved in major U.S. social movements for over 70 years. She was the daughter of Chinese immigrants and received her bachelor degree from Barnard College and her Ph.D. in Philosophy from Bryn Mawr College. On this page, we will be discussing the life of Grace Lee Boggs, who was Chinese American. The topics include her childhood as an Asian American in New York, her developing interest in philosophical concepts that influenced her activism, and her involvement Black Power movements in Michigan. Each section describes her personal experiences and her understanding of the social dynamics that led to her work in Detroit. Boggs is essential to our conversation about activism as she was a prominent Asian American organizer in an all black organizing space at a time when Asian Americans were not prominently involved in issues specifically targeting the Black community. Her deep engagement with issues in Detroit’s black community won the label of “Afro-Chinese” in the FBI reports of her activities. Although Boggs’ activism was almost exclusively in black spaces, she was nevertheless a model figure in the Asian American activist community for her anti-racist and coalition building efforts. She remains a prominent and inspirational figure in the Asian American community for her dedication to civil rights and anti-racist work.

She was a woman who barged into men’s territory, she was an intellectual who barged on worker’s territory. It is right for her to call herself a “revolutionist” because she has revolved and never ceased to revolve.